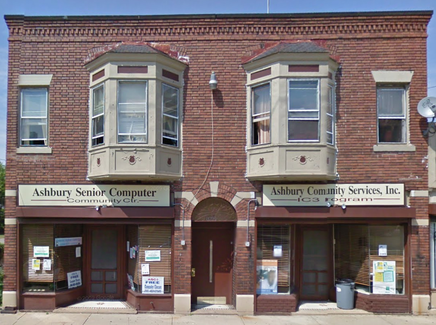 Formed in 2001, the Ashbury Senior Community Computing Center (ASC3) was designed to serve the needs of the local community members who see benefits in learning new computing technology. Currently located at 11011 Ashbury Avenue, ASC3 occupies a structure which has an important history in anchoring the life of the Ashbury community; a vital legacy which continues in its current function today. The building is more than a structure made of brick and mortar, wood and glass. The building at 11011 is more than the sum of its parts, and it reflects the diverse history of the surrounding neighborhood; proving that a building can reflect the life of a community, proving that its history can, at times, be as rich as the people living, working, and playing inside.

Originally built in 1919, the two story (commercial/residential colonial) building evolved with the community itself. The two sections currently occupied by ASC3 were separate entities, housing different community businesses. The 11011 section was a ‘mom and pop’ hardware store which thrived for 64 years before closing in 1998, illustrating the strength of the community; strength that is constantly being threatened by the K-marts and large hardware stores such as Home Depot. The part of the center residing at 11015 Ashbury Avenue housed a number of different businesses, from a meat produce store in the 1930s to a local church in the 1960s and an ice cream parlor in the 1980s. It is fairly obvious that as the surrounding community changed, the businesses within evolved as well.

In the early 1980s Cleveland was strongly affected by a nationwide recession and the Ashbury community went through a transitional phase where abandoned stores, apartments, and houses were becoming problematic. It was not until the late 1980’s and early 1990s that local community development corporations, such as the Northeastern Neighborhood Development Corporation and Glenville Development Corporation, partnered with the City of Cleveland Community Development and Empowerment Zone departments and also, local businesses to reinvest in the area.

It was during this time that large educational and cultural institutions bordering the neighborhood, such as Case Western Reserve University, reached out to the community. In years past there was a strict border that fell at Wade Park where Case students dared not cross. Now these borders are being erased, the communities are uniting and working towards the similar goal of prosperity and cooperation. Case has actually implemented a community card program encompassing University Circle, Wadepark and Ashbury Avenue. Plans are in the making to extend the program throughout the city. Click here for more information on this card program.

During 1998-2000, both the lots at 11011 and 11015 Ashbury Avenue were vacant, idle, and no longer functioning for the benefit of the community. Through the initiative of Wanda Davis and her husband, Percel, local business partners and neighborhood leaders, an entirely new type of community center was envisioned. The group formed a board of directors in 2001 and quickly began fundraising to open a community center to teach area residents about computers and, hopefully, give them a new edge in the new digital economy. The newly formed Ashbury Senior Community Computing Center received grants from local foundations and the City of Cleveland to set up a functioning computer lab designed to serve the local community.

Opening its doors in October 2002, ASC3’s first year of operation welcomed a total of 30 students in 2 class sessions. In 2005, there were approximately 55 to 70 students consistently in each class throughout the year. These numbers continue to grow and display the success of the center, as well as the widespread interest from the community.

Expansion is always a sign of success and with the financial support of Sky Bank, First Merit Bank, Key Bank, Fifth Third Bank, Shore Bank and the diligence of the board of Directors, the Center has expanded to the adjacent store front and is implementing an entirely new vision for the future.

In January 2005 the center was chosen as one of the participants in Mayor Jane Cambell’s “’War on Poverty’ Digital Initiative” program. Funded by the City of Cleveland’s Empowerment Zone, this newly renovated and fully funded lab offers IC3 courses. This acronym means Internet Computing Core Competencies, and teaches people how to make use of computers not only in everyday life, but also in the workplace. The original funding  provided the course and 15 new computers to create an entirely new lab.The goal of the center continues to evolve with the aim to become the digital gateway for all forms of information for the community; a goal that it is well on its way in reaching.